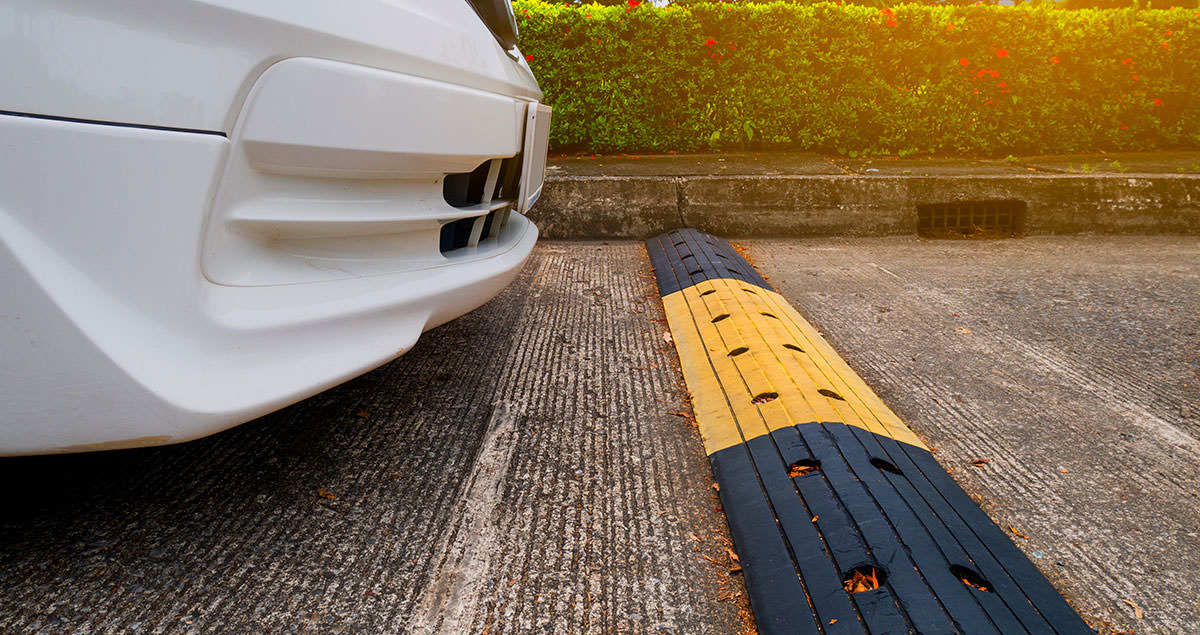 We all know that speed bumps hurt both us and our vehicles. When we’re not paying attention, that’s when they hurt the most! Have you ever wondered what the effects of speed bumps are on your vehicle? That was actually rhetorical. We’re pretty certain we’ve all wondered, “Did that do damage to my car?,” after driving over an unexpected speed bump.

What are speed bumps?

Speed bumps are actually used to calm traffic. The intent is for the driver to slow down before getting to them. If a speed bump is poorly designed, it can cause damage to your vehicle regardless of the speed you’re going. They’re a form of “traffic calming devices”.This is sometimes ironic, considering the high level of anxiety we feel after driving over them at an unintended speed.

Speed bumps are applications, usually made of asphalt, that are from two to six inches high and from one to three inches from front to back. The suggested speed to go over these bumps is about 5 miles per hour which is why they’re usually used in places such as parking lots, private roads, and low residential streets.

So, what actually happens?

Below, we’ve listed what can happen when you drive over those pesky speed bumps at a speed that’s over the intended level.

Yes, you read that right. If you’re driving over speed bumps at a fast speed, you can cause damage to your shocks.

The problem is that there is only so much shock they can absorb. Speeding over speed bumps makes it harder for the shocks to do their job because it happens so fast.

If your shocks get damaged, everything else on your car is vulnerable. What happens is the vibrations that were once absorbed by the shocks are now affecting other components.When your shocks are out, usually steering is next. Those vibrations mentioned have the ability to break your steering rack mounts, cause leaks in your power steering fluid reservoir, and also throw your wheels out of alignment.

Good Does come from Speed Bumps!

Contrary to what some believe, there is actually some good that comes from speed bumps. When speed bumps are installed correctly, they do truly slow down traffic. For instance, in areas with high pedestrian traffic, they are very beneficial.The slowed traffic resulting from the bumps creates a safer environment for pedestrians.

To sum it up, yes, driving 40 miles per hour over a speed bump can and will cause damage to your vehicle. It is best to be aware of speed bumps and be sure to slow down as you approach them.If you do accidentally take one too fast and are worried about the damage it may have caused, stop by your local shop to take a look. Better to be sure than cause further damage.